FINGERS OF FEAR by John U. Nicolson 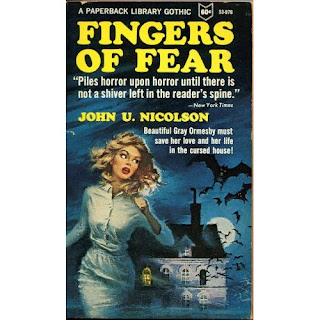 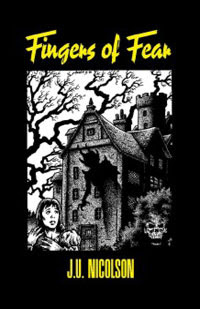 At the rate I'm going, I'll have to change the name of this blog to KEWPP ( KEW's Pen Pals). What started as a running commentary on the wild Operator 5 novels of the 1930's has transformed into a reading journal of Karl Wagner's "Best" list. I even have dreams of dedicated an entire bookshelf to KEW's essential list and calling it "The Karl Edward Wagner Memorial Library".
OK, I'd have to put some Kane books on their too. But I digress....
Fingers of Fear was #10 on KEW's 13 Best Supernatural Horror Novels list. As I open the pages of my old copy of Twilight Zone Magazine, this is what he said:

"This one has it all: lycanthropy, vampirism, family curse, patricide, incest, infanticide, hauntings, the works. Supposedly it was marketed as straight detective fiction. Must have freaked out the Agatha Christie fans."

What he should've added is that the most of the action in the book takes place during one night.
As always, the back story on these books is a thrill in and of itself. Fingers of Fear was first published in 1937,when the Great Depression was in full throttle and while the Nazis and communists were squaring off over Europe. In other words, it was not a fun time to be an educated man. From what I have been able to find out about the author John Nicolson, he was a scholar of medieval literature. His translation of The Canterbury Tales into modern English is one of the most popular versions available. How he came to write a book which ranks with the best of the shudder pulps is a story yet to be told.
Another story yet to be told would involve how this book was reprinted as a paperback gothic (July, 1966), complete with the obligatory cover painting of a woman fleeing from a dark mansion. And you just have to love the blurb on said cover:
"Beautiful Gray Ormesby must save her love and her life in the cursed house!".
For a 60's paperback, it didn't come cheap. But it was still less expensive than the more recent Midnight House reprint. As always, I go with the cheaper reading copy since I'm not a collector of first editions, even if the newer reprint did have an essay on Nicolson. I'm sure the intro in the newer edition would've shed more light on Fingers of Fear, but I really wasn't very impressed with the intro to their reprint of Echo of a Curse, considering the recent revelation about it's author. At least not impressed enough to shell out extra $$$.
Enough background! To the story!
It's June of 1933. Foncy lad Seaverns finds himself jobless, down to his last few cents, divorced from his aspiring Broadway actress wife, and standing outside his old members-only club in New York City. Who should come by? Why his old college chum Ormond Ormsbey. Hearing that Seaverns is desperate, Ormsbey offers him a job at his family home in upstate New York writing a scholarly book on the Elizabethan influence of colonial literature. He is to use a vast inherited library at the family estate. Seaverns can even stay there while he's working on the book and draw a stipend. Why? It seems Ormsbey has inherited a truck load of colonial books and manuscripts from an antiquarian aunt and has to produce this text with 18 months or everything, including a substantial cash sum, will be donated to a historical society. With no other options, Seaverns quickly takes the job and travels to the Ormsbey compound.
At the manor house, Seaverns meets: Ormsbey's wife Agatha, his beautiful sister Gray, the manserveant Hobbs, and Hobb's wife. Ormsbey's invalid aunt Barbara is supposed to live there too, but is sequestered in a private room. Seaverns, who is also the book's narrator, assesses the job and tries to beg it off once he sees the size of the vast collection of books Ormseby's inherited. Ormsbey, however assures Seaverns that he's the man for the job and leaves the estate for his business in New York City.
As soon as Ormond leaves, Seaverns meets a mysterious spectral lady in the library who promptly vanishes. And then, in the course of a 24-hour period he encounters:

*A revelation about Ormsbey's father killing his mother in an insane rage.
*Both the bodies of Ormsbey's mother and father being stashed in secret somewhere on the estate.
*A vision of Gray naked, with blood on her mouth, howling at the moon.
*A secret passage between the various rooms of the mansion.
*An evil twin.
*A dead body in the garage.
*A blackmail attempt.
*Insanity in the Ormsbey family.
*Ormond showing up at the estate with Seaverns recently divorced wife.
*Buried treasure.
But wait, there's more!

To give away the remainder of the plot would be to spoil it for a potential reader. Suffice it to be said this book crams more plot bends in the first 100 pages than you will find in a vintage house sewer system.
Nicolson did know how to write a sentence. Wittiness this description of Gray Ormsbey's fainting spell:

The only real problem I had with Fingers of Fear was the narrator's inability to let the reader know just where the hell he was while in the house. In a complicated space such as the the Ormsbey manor, it is important to know where all the principal characters are in relation to everyone else. I don't know if Nicolson based the manor house on an actual dwelling, but a diagram would have been helpful. Perhaps this would be an excellent task for a future illustrator: a complete lay-out of Ormseby manor.
This is still an excellent and well-crafted novel. I surmise KEW read one of 1966 reprints. Since he was trained as a psychiatrist, I can easily see how a complex story of aristocratic families going crazy would've appealed to him.
Posted by Tim Mayer at 10:43 AM

Labels: FINGERS OF FEAR by John U. Nicolson, KEW list