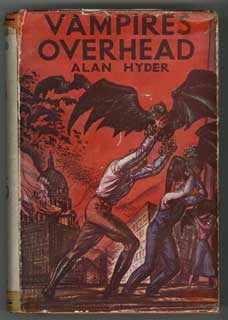 "Civilization is destroyed again, this time by a bizarre migration of a life-form from outer space. A strange and effective between-the-wars British thriller."

I would very much like to know why KEW chose this book to be on his essential list, but I don't have the particular issue of the old Twilight Zone magazine where he listed it. There are times I wonder how KEW came by these books. Vampires Overhead seems to have been published once, in 1935, then reprinted by Ash Tree Press in 2002. The original fetches prices in the thousands of dollars, whereas the reprint can be had much cheaper. In case you're wondering, I went with the reprint.
Vampires is told from the point-of-view of "Garry" Garrington, a former soldier in the British army who finds himself one of the last remaining humans in England. The story is set at the time of the book's writing, with plenty of British references and attempts at dialect. Not much is known about the author Alan Hyder; some people assume he was from Jamaica.
At the beginning of the novel, Garry meets up with Bingen, an old army comrade who takes him over to his place of employment for old times sake, which happens to be brewery. Needless to say, they get plenty toasted on the proceeds of the vats, reminiscing about the good old days. When the brewery owner makes an unannounced appearance, the night watchman, also a former military man, locks them in an underground tunnel until the owner leaves. They sleep-off the drunk, unaware what's happen above them.
Both men wake the next morning to find themselves still locked in the tunnel, with a bat the size of a pit bull hanging onto the outside of the gate. While they try to figure out what to do, more large bats show up, all of whom are trying to get to Garry and his friend. And the bats don't leave.
When Garry and Bingen are finally able to leave the tunnel they discover the city of London has burned to the ground. The few bodies they can find are all drained of blood. It seems the bats are vampires and humans their prey. The bats also produce fire, but they themselves are immune to flames. They may not be all that large, but they have appeared overnight all over the earth in swarms. One giant vampire bat can be a nuisance, but swarms in the thousands, if not millions, are genocide.
The first part of the book consists of Garry and Bingen scouring the remains of London, trying to find any supplies or survivors. They eventually locate an 18-year-old-woman named Janet who was shielded from the holocaust under a load of asbestos tile on a barge . Here's where the real tension begins, since Garry is concerned for her safety, whereas Bingen has something else on his mind. Soon, appearances of the vampire bats are becoming less and less common, although the three survivors constantly scan the clouds in expectation of a swarm.
The giant vampire bats are a curiosity and the drive behind the novel. Hyder didn't do a lot of research into where they came from or how they function. We're told the bats have produced the heat which burned out civilization, but never do we see their incendiary arts in operation. They function in the daytime, although bats are nocturnal. The vampire bats can only be killed by decapitation, but a silver blade isn't needed. How they came to be in our world is not explained either, but Garry thinks they might have something to do with a comet which blazes in the evening sky.
What few other survivors the trio locate when they leave London don't offer much in the way of help. Examining the ruins of a village, Garry finds a mad British office worker, complete with bowler hat, on his way to work. After settling into the remains of a remote village, they encounter a drunken tramp who proves to be an antagonist wanting Janet for himself.
Hyder's descriptions of the world in ashes proved to be a glimpse of WW2. Although the book at times reads like an HG Wells imitation , the basic plot is quite unique. And this is why it is remembered years after the initial publication.
Posted by Tim Mayer at 9:19 PM