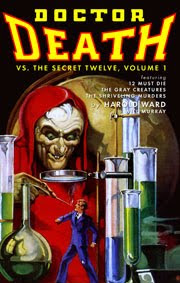 Doctor Death was originally a minor character in some pulp stories of the 1930's. The forward in this collection suggests that the publisher decided to give him his own magazine after the edition of All Detective magazine featuring a Dr. Death cover sold very well. The success of the story never transferred over to the larger format and the Dr. Death magazine was canceled after three issues. Vol. 1 of the Altus collection contains all three of these plus a pitch writer Harold Ward did for a Dr. Death comic strip.
In 12, Dr. Death is revealed to be Professor Rance Mandarian, a once highly respected university researcher who had gone insane. Recreated himself as Dr. Death, Mandarian has decided to wage war on human civilization. A master of the occult sciences, Dr. Death has discovered the means to create zombies and harness elementals, deadly spirits who can destroy anything in their path. At the beginning of the book, he issues a warning to the world: destroy the wheels of industry and return to living off the land or face his wrath. To make his position clear, he pronounces a death sentence on 12 leaders of science and industry. He then dares anyone to save them.
Opposing Dr. Death is The Secret Twelve, a council made-up of the leaders of society (and the underworld). Death's main adversary is Jimmy Holm, a privately wealthy police detective and Detective Inspector John Ricks, a hard-boiled copper from the old school.
The writing style is crisp and to the point. No long scenes of descriptive dialogue here! The pulp audience wanted entertainment in the way of action. We do get a detailed tour of Dr. Death's subterranean lair and it comes complete with the walking dead and stacks of bodies. Plot devices tend to be quick as well; when Jimmy Holm and Death's assistant Nina Ferrera fall in love it takes place over the course of two pages.
The next novel, The Gray Creatures, has Dr. Death traveling to Egypt to find the lost tomb of Anubis, the ancient god of the dead. Death has learned of an amulet in the tomb which will enable him to raise the dead of Egypt and complete his conquest of the world. Of course, Nina gets kidnapped by the fiendish scientist right before his trip, forcing Jimmy Holm to head off in hot pursuit. This is the best novel of the three as Ward is able to build an effective sense of tension in the scenario as Death gets closer to his goal. And along the way we encounter a lost tribe of pyramid builders. Jimmy Holm thwarts Dr. Death in the last few pages of the novel, but the crafty old test tube cleaner manages to escape once again.
The final novel, The Shriveling Murders, has it's name taken from Dr. Death's latest invention: a ray gun which sucks all the moisture out of a person's body, reducing them to a dead doll. Death has plans for his new toy and the means to carry it out. Although not quite as good as Gray Creatures, it has numerous scenes which are wildly out of control. There's even a riot at an insane asylum where a herculean lunatic leads a mob of madmen against Death's army of the living dead.
But Shriveling also has a voodoo cult scene which is embarrassingly racist. I'm glad Altus didn't censor it; future generations need to experience this sort of thing for comparison.
Once again Nina is conveniently kidnapped and falls into Death's clutches (this being her main profession). Of course, Jimmy saves the day at the end, but Dr. Death escapes.
The collection has a nice introduction by pulp historian Will Murray. It concludes with a proposed daily comic strip script by Harold Ward. The script neatly distills the major plot devices of 12 Must Die down to the essentials.
All-in-all, an excellent collection with fine illustrations from the original magazines
Posted by Tim Mayer at 4:02 PM