The Master of the Day of Judgment by Leo Perutz 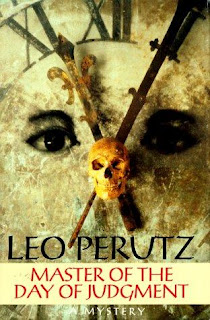 #12: "The Master of the Day of Judgment by Leo Perutz
Is it real or is it hashish? But what is reality? It's all relative, isn't it? This one is strange even for Perutz."

The Master of the Day of Judgment is told from the point of view of Baron Yosch, a military officer in the Kaiser's army. Although the events taking place in the book occur over a few days in 1909, the book supposedly comes from a manuscript found in the baron's personal papers after he went missing during WW1. As such, it is a "found" novel, a style not very popular these days. The edition I'm reviewing is the 1930 Hedwig Singer translation.
At the beginning of the book, we are introduced to the baron's circle of friends: the actor Eugene Bischoff, the physician Dr. Edward von Gorsky, and Engineer Waldemar Solgrub. A married couple, Felix and Dina (Bischoff's sister) also figure into the novel. Most of the action takes place in the same city, which appears to be Prague.
Structured as a murder mystery, Master is concerned with a rash on unexplainable suicides which have occurred over the past few weeks. The key death happens in the first fifty pages when the actor Bischoff kills himself with a pistol in a closed room. No one can figure out why he did it. The baron suddenly finds himself accused by everyone as he had been too close to Bischoff's sister Dina. The actor had also lost a large sum of money in a bank crash and the baron is accused of confronting him with this information.
Baron Yosch plays the part of a dandy through the book. He's a military officer, but has never seen combat. He's more interested in playing Beethoven on the piano than any martial activity. When the baron suddenly finds himself at the center of a murder investigation, he decides to retire to a country estate he's not visited in years. We're constantly given detailed events of trivial matters he remembers from the event.
As more suicides occur, the remaining witnesses to the death of Bischoff become convinced some evil entity is at work. Eventually they trace the source down to one location. To tell more about it would give away the ending of the book. I will say it is quite a surprise, and worth the read.
Master of the Day of Judgement is an excellent book and can be read very quickly. I'm sure the translator added much to the flavor of it.
Posted by Tim Mayer at 11:52 AM

Labels: KEW list, The Master of the Day of Judgment by Leo Perutz