The Deadly Percheron (1946) by John Bardin 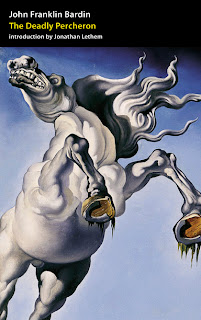 "The opening chapter defies description. Imagine one of those 1930s screwball comedies with the crazy situations, but substitute malevolence for humor."

Dr. George Matthews is an established psychiatrist in New York City. He's in his 30's, happily married, and has much to be proud about in his life. One day a young man, nicely dressed, walks into his office wearing a flower in his hair. This is not something that happens on a regular basis in 1943. The young man, named Jacob Blunt, tells the good doctor that he is going insane. Little men keep paying him money to do ridiculous things. Sometimes it's wearing flowers in his hair, sometimes it's giving away quarters. The money he's paid is good, but the little men keep wanting him to do stranger and stranger things. He's sought Dr. Matthews out because Blunt isn't sure if the little men are real or not.
To help Blunt, Dr. Matthews accompanies him to a bar one night to meet one of the little men. And in the midst of the bar emerges an actual dwarf who introduces himself as an American Leprechaun. Next, he tells Blunt about the next job: delivering Percherons (draft horses) to select people in New York. There's even one in a van outside the bar; all he has to do is tie it up at a given location. Sure Blunt is the brunt of a hoax, Dr. Matthews leaves the bar and takes a train home.
The following morning, Dr. Matthews learns that a famous Broadway actress has been murdered and there is a Percheron tethered in front of her townhouse. Jacob Blunt has been found drunk at the location. But he swears he isn't the killer. When Matthews comes to see Blunt at the police station, they release him into Matthews' care. However, the man they produce as Jacob Blunt isn't the same man who came to see the psychiatrist. Deciding to find out what the hell is going on, Matthews accepts Blunt into his care. But on the way to the subway, he is struck from behind and passes out.
Matthews wakes up in a hospital to find his face disfigured and the staff calling him John Brown. He's in a mental ward, having been found wondering the streets in a delirium with a social security card in the name of John Brown. When he insists he's the psychiatrist Matthews, the hospital checks up on his claims. To his horror, they inform him Dr. George Matthews was found dead ten months ago.
The only way he's able to get out of the mental ward is by pretending to be the derelict John Brown and concocting a story the hospital staff will believe. Eventually, he's released and gets a job working in a cafeteria in Coney Island. "John Brown" settles into his new life and tries to fit in with the other carnival workers. But one day he encounters the leprechaun he'd met with Jacob Blunt....
Perecheron can be a confusing book to read. After Matthews meets the "leprechaun"the second time, he begins to unravel the mystery of what happened to him in the intervening months between his blow to the head and waking up in the mental hospital. The reader is given the sequence of events almost in reverse order. You only find out what happened after the doctor remembers something. In some ways it reminded me of Christopher Nolan's Memento (2000) film.
Highly recommended for fans of hard-boiled crime fiction.
Posted by Tim Mayer at 1:18 PM