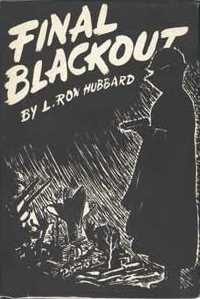 It's a little hard to be objective about anything written by L. Ron Hubbard. Founder of his own religion, he was also a pulp writer in the 1930's and 40's. Most people think of him today as that "Scientology" guy. His last multi-part novel, Battlefield Earth, was everywhere to be found in the last century, especially in used bookstores. He published over a hundred novels and short stories during the pulp years, under a variety of pseudonyms.
Final Blackout began as a three-part serial in the April 1940 edition of Astounding Science Fiction (it was later published as a hardback in 1948). It's important to remember this date when discussing the novel, because it was very much part of it's time. Although the war had been waging on for over a year, Germany and the UK had not undertaken major operations against each other. British troops were in the continent of Europe, but France had not yet been invaded. This would soon change. The United States had a neutrality policy.
Hubbard's premise in Blackout was that the war in Europe would drag on and on. In the opening of the book, the war has been going on for over twenty years. Taking the stalemates of WWI as a model, he envisions a state of continuous conflict where allies shift and boundaries change. New technologies have allowed humans to become more effective killers, but no one has achieved a victory. The blitzkrieg was still over the horizon and a lot of people assumed another global war would resemble the last one.
Blackout begins with the remains of the Fourth Brigade of the British Expeditionary Force trying to outmaneuver a detachment of Russian soldiers. They're somewhere in France, but the officer in charge of the brigade, a charismatic thirtysomething man only known as "The Lieutenant" has had no word from his command in four years. Thus they are surprised when a captain from the BEF shows up and orders them to return to general headquarters. Because of biological weapons, no British soldier has been allowed to return to England in years.
The focus of the novel is on the lieutenant. He's only known war, but has survived so many engagements that his men look on him as some sort of divinity. He doesn't talk much, plays solitaire between engagements, and looks after his troops. But he doesn't hesitate to order an execution if he deems it necessary. "He was born in an air raid shelter", reads the first line of the book.
Eventually, the lieutenant and his troops reach the BEF headquarters. They discover the latest government in England has been taken over by communists, who are ordering soldier's councils (soviets) to be organized in each detachment. The lieutenant is relived of his command and his troops turned over to officers who are more in tune with the new government. This, naturally, provokes a revolt in the enlisted men who seize control of the officers and put the lieutenant back in power. With his troops restored, he takes control of the GHQ and organizes a mass flotilla of soldiers back to England. It turns out a vaccine has been developed against the bio warfare germs which kept them out.
Most of the remainder of the book has the lieutenant sailing into England with his army and seizing control of the country. Hubbard spends a lot of time detailing the king of tactics which an army short on modern weapons and ammunition might have to use. The opposing force on the coast has converted their modern cannons into muzzle-loaders since shells are hard to find. England has been depopulated by war and pestilence. The lieutenant executes the leader of the communist fraction which had been in charge and begins to rebuild England.
His work continues uninterrupted. One day a ship from the US is sited off the coast. The Americans have been out of touch for years and now want to resume contact. The same day an American reconnaissance plane soars over the lieutenant's HQ in the old Tower of London, scaring everyone. They haven't seen any aircraft in years. Suddenly, the lieutenant's kingdom is threatened.
The biggest criticism aimed at this book is that it is fascist. I suppose you could call it a fascist novel if you define fascism as the use of violence to bring about political change, but then Superman falls in that category too. The book seems to be advocating a restoration of a military-based aristocracy; "Cesarism", if you will. It's well-written, if a little simplistic, but a good example of apocalyptic science fiction.
Posted by Tim Mayer at 8:58 PM