The Hand of Red Finger by Leo Zagat 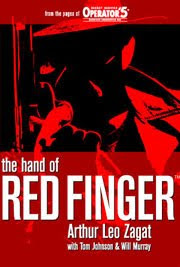 In the 1930's, the hero pulps were everywhere. A casual walk to a newsstand would get you the latest Doc Savage, Spider, Phantom Detective, or Operator 5. And it was in the back pages of the Operator 5 magazine another pulp hero was created: Red Finger. Red Finger was a counter-spy whose job it was to take down enemy agents. His turf was America in general and New York City in particular. From 1934 to 1938 The Red Finger battled spies with his signature gas gun and black gloves ( with scarlet trigger finger).
What made Red Finger so interesting was the secret identity he held. Unlike other caped crusaders, the man behind this mask didn't have a lot of money. His true self was Ford Duane, a second hand bookstore owner in a run-down section of New York City. Most of the time he could be seen shuffling his musty volumes around in a cheap coat. He even lives impoverished in a small room at the back of his store. But, every so often, he would receive a message from his government contact as to the next target. Then Ford Duane would vanish out of a hidden passage and emerge as Red Finger, terror of foreign agents.
The best part of each story is the first paragraph. Writer Arthur Zagat manages to grab the readers attention with a brilliant opening montage each time.
The book reprints all of the Red Finger stories, with a new one as a conclusion by editor Tom Johnson. Most of them follow a very tight formula: Ford Duane gets his message, he decodes it, then goes out in disguise to eliminate his target. The code is always based on the letters P-A-T. The enemy agents don't seem to have a lot in common, some are clearly Italian fascists, others German, with a few from an Asian country which stands in for Japan. Although the Asian spies are the most noble, they are often described in the disgustingly racist tones so prevalent before WW2.
Tom Johnson deserves a big round of applause for bringing out this story collection of a unique and obscure pulp hero.
Posted by Tim Mayer at 9:43 PM

Labels: The Hand of Red Finger by Leo Zagat