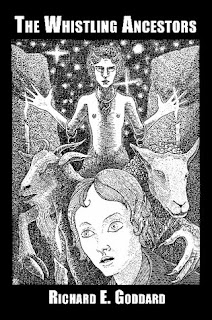 The Dancing Tuatara Press imprint of Ramble House Books has once again rescued an obscure horror novel from oblivion. Who knows? We may some day be able to order the complete works of R. R. Ryan on-line and have them delivered the next day in a special leather-bound edition. I do feel we are in the midst of a major revolution in small press printing.
The intro by DTP guru John Pelan describes The Whistling Ancestors author Richard E. Goddard as a sales genius who only had one other book to his name: General Cargo-An Introduction to Salesmanship. Since there is very little known about him, we can only wonder why he decided to publish a book which mixed voodoo, satyrs, satanism, race war, conspiracies, and delicate women who need to be rescued. Since the book was originally published in 1936, I think Mr. Goddard must've been reading American shudder pulps in between sales campaigns.
Ancestors introduces us to one of the most interesting criminal masterminds of the 20th century: Dr. Caspar Pettifranc. The villain is discovered by Patrick Worthing, a sidewalk painter.
Worthing, who is in his early 30's, has figured out a means to get a little sympathy from the pedestrian traffic: he hides one arm under his coat, making him appear to be handicapped. He also has a chalk board with him in order to communicate with anyone on the street, so as to seem deaf. One day he encounters a gentleman of mixed ancestry who just happens to need a doorman who can't talk to guests.
I say "mixed ancestry" because such is the best way to describe Pettifranc, whom the author calls "mulatto". As a matter of fact, he uses the "M" word constantly through out the novel. Goddard isn't above using the "N" term as well. The casual racism of this book is one of the most jarring aspects of it. We've even told Pettifranc's sinister plans may be the result of his inability to be part of either race. Makes you wonder what Goddard would think about our current president. The one good thing I can say about this part of the book is that there are few racist characters: all the people of color seem to be educated and well-rounded.
Worthing is able to track Pettifranc back to the good doctor's base of operations. He finds out in chapter 6 that a plan has been hatched by Dr. Pettifranc to unite all the non-white races against the blanc ones. Furthermore, this plan is being made possible by harnessing the power of The Evil One (known as "Zamiel") himself to overthrow the existing order. Along the way he encounters a voodoo mamloei known as Maman Constance and a work team of zombies. The title refers to an odd chirping sound which appears every time the voodoo spirits are summoned.
Oh. Yes. There's a sinister underground laboratory where a mad scientist is creating mythological creatures to help summon Zamiel and a sacrificial altar. At least three women are kidnapped for Pettifranc's fiendish purposes. Several stalwart British gentlemen are forced into cooperating with the forces of evil. Did I miss anything?
One of the other oddities of this book is how the action doesn't kick into high gear until we get to see Dr. Pettifranc at work managing his sinister enterprise from inside his headquarters. And it's tough work being a criminal mastermind: crazy Eastern European scientists to manage, underlings from India you can't trust, and suspicious people trying to mess everything up. No "maggots of madness" here: Pettifranc runs a tight ship and expects the best from his people. You do get the feeling the author identifies with the villain.
So I can recommend this publication as one of the more interesting examples of a British thriller. The book reads well in spite of the racism of the time.
Posted by Tim Mayer at 10:05 PM