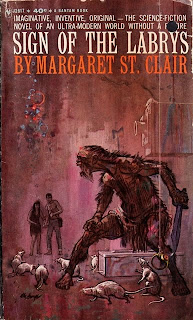 Sign of the Labrys seems to be the one Margret St Clair novel people remember. Although the cover art has little to do with the book itself (big surprise there), the blurb on the back proudly proclaims: "Women are writing science fiction!" And we are told that it is "Fresh! Imaginative! Inventive!" Just like a loaf of wonder bread. I do hope she got some mileage out of this book, first published in 1963. At least some fame would compensate for the covers.
Written from the point of its protagonist, Sam Sewell, Labrys can best be described as a science fantasy idea novel. Although the hero uses science to further his ends, he also delves into the realm of fantasy, and he does it for idealistic reasons. It's also one of the first novels which treats Wicca as a bonafide religion. In some ways, this book is a statement of faith.
It's a post-apocalyptic book which takes place 10 years after 90% of humanity have been wiped out from scientifically created yeasts. Most of the survivors of the plague are living in underground bunkers built for the nuclear war which never came. The survivors are scaveging off the land- most of the trees having been destroyed-and burying the dead.
The novel begins with Sam recieving a visit from FBY agent Clifford Ames. It's never mentioned what FBY stands for, although Federal Bureau of Yeasts might be a good guess. The FBY is the only thing which passes for a government, since most of the plague survivors can't stand being in close proximity to one another. The FBY man is searching for a woman named Despoina (Greek: "Mistress") and he thinks Sewell may have been in contact with her. The FBY suspects her to be a "sower", which is to say a lunatic who deliberately spreads deadly microorganisms.
Although Sewell just wants to be left alone to live his life on E level in the underground bunker, he soon finds out that other people are interested in him. Someone leaves a mystical ring in his posession, he sees the sign of the labrys ( a double-headed fighting ax) on the cave walls, and mysterious figures whisper "Blessed be" in the darkness. Ames returns, dies in a struggle with Sewell, forcing Sewell to venture into the lower levels in search of truth.
On his way down he encounters a mycologist named Kyra who is doing research in what remains of the government labs in her sector. Through the use of mirror gazing and narcotics, she is able to help him look into his soul. Sewell has visions of another life where he danced around the fire and was chased by animals She's also able to get Sewell into the next level, G.
G level turns out to be where all the self-appointed important people reside. They had fled underground in anticipation of nuclear war. After a casual encounter with a woman on this level results in her death, he begins to suspect he may be carrying a deadly yeast infection. By now he's developed the ability to see inside people. A very intelligent dog is able to show him the way to the final level, H.
At level H, Sewell meets Despoina, in all her pagan majesty. He's initiated into the Kraft, just as the FBY attacks. Sewell manages to make it back up to Kyra at the F level, where they plan on making contact with Despoina, but the FBY attacks once again, this time with super cool carbon dioxide gas, intent on freezing everything out of existence. Sewell and Kyra manage to escape the feds through the use of extra-sensory powers. Their goal is to regroup with Despoina's Krafters and strike back at the FBY.
One of the interesting things about the novel is the use of a labrys as a symbol for Wicca. Today, most Wiccian initiates use the pentagram. Once upon a time, the ankh was in vogue, but the five-pointed star seems to have won out. In Greece today, the labrys is used as a symbol of paganism. In North America, it's usually seen as a lesbian symbol (the amazons were supposed to have fought with a labrys). I suspect that St. Clair, having a background in Greek and Roman studies, wanted to associate the Wiccan religion with ancient Greece as much as possible.
Labrys suffers from some of the loose ends which I've started noticing in St. Clair's other writings. At a crucial point in the plot of the book, we find out the pre-plague civilization had developed matter transmitters. OK...if they could send a physical object anywhere, what protection would an underground bomb shelter furnish? Did the matter transmitters become standard just before the plague? And what's with the secret clan of the Wiccans? Where did they come from?
Once again, St. Clair wrote a good novel, just not the great one I'd hoped to find with this book.
Posted by Tim Mayer at 10:20 AM