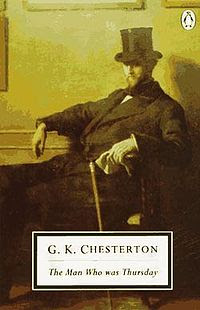 Strange, surreal book by Roman Catholic writer G. K Chesterton. Known mostly for his Father Brown mysteries, Chesterton, was a prolific writer at the turn-of-the-century England.
Thursday concerns secret policeman Gabriel Syme's infiltration of an "anarchist council". Each member of this council has a different code name, one for every day of the week. Syme manages to get himself elected to the post of "Thursday", the British representative. However, it soon turns out that each represenative is also a police agent. Moreover, they've all been recruited by the same unseen figure.
I'm told this is a favorite book of people who've worked in real secret service agencies.
Posted by Tim Mayer at 10:52 AM

Labels: The Man Who Was Thursday (1908) By G K Chesterton