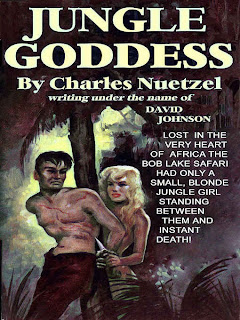 I love jungle stories. Always have since watching Ron Ely swing from the trees as Tarzan in his 1960's TV show. As I grew a little older I came to understand that Africa was not an endless forest of vines and howling animals. But that never stopped me of dreaming of lost cities and noble warriors.
Paperback commando Charles Nuetzel has recently released some of his 60's novels into ebook form. This is a good thing as some of these books are not easy to find. Unless someone puts their old copy up for sale on the Net, they don't surface very often. With bookstores fading everywhere, it's hard to remember a time when the racks were miniature art galleries. The cover for Jungle Goddess was painted by Nuetzel's own father.
Jungle Goddess is a quick, fun read. A "Mens' Adventure" writer is sent on assignment into Africa with a up and coming photographer to photograph places seldom seen by civilization. The writer, Bob Lake, is a washed-up hack who hides from reality in a bottle. His photographer, Carol Hill, is determined to become famous in her field. Along the way they make the aquaintence of poor little rich girl Rita Bentley and big game hunter John Barton. All four of them are forced to survive as one group when their plane crashes somewhere in the forbidden jungle. And, of course, there's a wild feral girl named Tallie who lives in the rain forest and swings from the trees.'
It's obvious that Nuetzel's big sell for the book was Tallie the jungle girl. He spends a lot of time talking about her, showing the action from her point of view, etc. He's quite taken with her. We never do find out how a blond girl was dumped in the jungle to fend for herself, but there is a reference to an airplane crash. Detailed back stories are not one of this novel's strong points.
One of the more embarrassing aspects of jungle stories is how they depict the native Africans. And this book doesn't go out of it's way to sympathize with them. Africans are usually referred to as "the blacks". They exist just to play the role of gun bearers or savages. But, as African American writer Derrick Ferguson often points out, you have to consider the times when these books were written.
And yes there are sex scenes. Did you expect otherwise? But they are tastefully written. The novel came out at the junction when the Adventure "Sweat" magazines where being phased out in favor of stronger material. Graphic encounters were not yet the norm.
Jungle Goddess is an amusing, if dated, look at the world of adventure paperbacks from the early
60's.
Posted by Tim Mayer at 1:31 PM