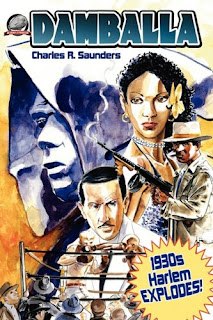 Charles Saunders, author of Imaro and other African Sword and Soul heroes has released his own tribute to the pulp novels if the 1930's. It is a fact: there were no black pulp heroes in the 1930's save Dick Benson's sidekicks. It's good Saunders can rectify this with his "New Pulp" book.
It's Gotham City in the 30's and the only thing looming bigger than the Johnson- Kreiger heavyweight championship fight (patterned on Louis vs. Schmeling) is the mysterious Damballa, hero of Harlem's downtrodden. Cloaked in a black cape, Damballa appears out of nowhere to stop a home invasion robbery at a soiree organized by the Harlem elite for the Black American heavy weight champion, "Jackhammer" Johnson. The police, especially Detective Errol Bynoe, are respective, but jealous, of this one-man avenger. The Third Reich is sponsoring Kreiger as the "Aryan Adonis".
As the big fight looms closer we learn the German Nazis have concocted a deadly serum which will render their prize fighter invincible in the ring. Damballa eventually discovers the nature of the serum. With his African grandmother, he cracks the formula in a secret underground laboratory. Now he has the power to administer it to the Black American boxer, but will the serum do more damage than good?
The best parts of Damballa center around the heavyweight bout. Saunders shows his knowledge of boxing by having the description of the fight given by an announcer. As Kreiger and Johnson bash into each other you can feel the surge of energy from the fans. This is easily the best part of the book.
If there is any thing negative to said about Damballa, it would be stylistically. It's hard to recreate the world of the 1930's which gave birth to the pulps. In some ways, why would anyone want to? The pulp hero novels stuck to a very specific formula which is hard to duplicate. Saunders has his own style, which serves the novel well.
I'm looking forward to the next Damballa episode. Maybe the local newsstand already has it in stock.
Posted by Tim Mayer at 8:38 PM