Beat to a Pulp: Hardboiled, edited by David Cranmer and Scott D Parker 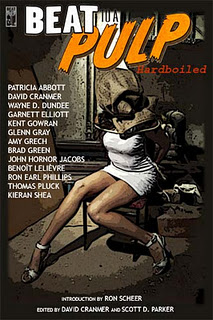 "Hardboiled" fiction has been popular since the post WW2 era. Every since returning GI's started coming home after the Good War, there has been a certain cynicism in detective fiction. Hardboiled differs from the pulp era in that problems could no longer be solved by costumed crusaders and super scientists. No longer were people content to read about masked villains who created zombies, they wanted to read about the real killers. And this style of writing has stayed around.
Ron Scheer creates a bit of a time warp by putting the start of hardboiled fiction at the election of 1912 where Woody Wilson won with a plurality of the electorate. This allows him to connect the latest pulp revival to the election of 2000 where another candidate lost on a technicality. All good and fine, but I don't seem to recall Kaiser Wilhelm exploding a zeppelin over Manhattan in 1914. Which is a nice way to say that he goes a long way to a make a minor point.
Be as that may, the stories in Beat to a Pulp: Hardboiled are all bleak and excellent, with only a few having a ray of hope at the end. "Second Round Dive" by Benoit Lelievre has to be the best of this lot. It's about a prize fighter who's tapped to take one more dive for a Big Man. His observations of boxing strike home to anyone who's ever trained in hand-to-hand combat:

No one gives a shit if you're a good Christian, if you're a family man or a faithful husband. It's irrelevant. If you're injured, if your brother died or if your dog is sick, nobody in the crowd cares.


"Ric With No K" by Patrica Abbot is in the same vein: a teenage girl becomes involved with an older hood, but you wonder who is the corrupted and who is the corrupter. "The Death Fantastique" by John Jacobs goes further in this direction in its tale about a drug mule, a prostitute, and her vicious pimp. These are the kind of stories where there is no "good guy".
On the black humor side there is "Vengeance on the 18th" about a golf course owner who takes out his revenge on a cheating wife with a snappy conclusion. There's also "Tachibana Hustle" by Garnet Elliot where Japanese hoodlums screw up one time too many.
I also learned a new term: flash fiction. It's applied to any story under 500 words. In the old days we called these "short-short stories". Several of the writers here are connected with an online zine called Shotgun Honey which is devoted to this style.
The final story, "Bulls Eye View", is my own favourite. A private eye and a bounty hunter are relaxing in an Oklahoma bar when one of them notes an infamous New Orleans hitman in their midst. What happens next is worth the read. Not to give to much away, but I'll be a lot more careful he next time I go fishing.
All the stories in this collection are of superior quality. I hope we'll be seeing more in the future.

Labels: Beat to a Pulp: Hardboiled