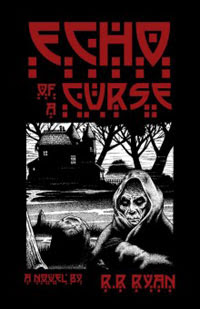 Continuing with the KEW essential reading list, we now arrive at Echo of a Curse, a book I've been trying to read for the past 25 years. The R R Ryan novels on the list are some of the most difficult to find and this reprint wasn't cheap ( my limited edition copy is #6 out of 450 offered for sale). It's still no where near as expensive as the 1940 edition, if you can locate one. Oddly enough, this reprint was taken from an original edition which had belonged to KEW.
One of the more amusing things I've encountered in the introduction to this book (by DH Olson) is the assumption that RR Ryan was a woman. From what I understand, many people (most notably Karl Edward Wagner) had made this assumption as well. For years no one knew a thing about RR Ryan and the few people who had read the scarce books by this author assumed the identity to be female (because of the writing style). There's even a small artist's
rendition of the woman RR Ryan in the front.
All of which was proved WRONG when some literary sleuth went and checked the original publishing contracts. He found out RR Ryan was a MAN named Evelyn Bradley.
I like to imagine the day this information was revealed was greeted by the sound of thousands of feminist literary scholars shrieking because now they would have to revise an entire footnote (heh, heh).
The tone of the novel is slow and dark. For all the reputation of Ryan novels, I didn't find this one to be any where near the gut-punching cruelty in the average Charles Birkin story. It also assumes the reader is familiar with the King's English language of the day. All the "What, ho?" dialogue can wear on the Thames-impaired, but the book does deliver a good story.
The novel follows the lives of three people as they interact with each other over a period of twenty-five years. The first two of them are Terry Cliffe and his next-door neighbor Mary. Both have grown up together. Terry goes off to fight in WW1 where he meets Vincent Boarder, a strikingly handsome young man with a tendency to turn into a dangerous drunk. Vin goes home with Terry on leave and meets Mary. Vin woos and weds Mary.
Then the story gets nasty. Not only is Vin a dangerous drunk, but he's a mean one as well. Terry catches Vin trying to kill Mary one day and flattens him. But by now Mary is pregnant with Vin's child and divorce is out of the question. Vin sobers up and promises Terry to go on the wagon. Furthermore, Terry makes Vin promise to get a job and sleep in a separate room in the house. Vin agrees, but offers one strange reason for his sadistic behaviour: his father was an occultist who'd founded a religion on the undead and believed himself immortal.
Meanwhile a circus attraction known as THE UNEXPLICABLE has escaped and is killing innocent people right and left. Vin thanks it might be his father, but offers no reason why. The creature, which seems to be some kind of werewolf, gets close to Vin and Mary's house, but vanishes for good.
The second part of the book takes place over twenty years later. Terry has moved out of his house and in with Vin and Mary (to keep a better eye on Vin's behaviour). Vin has appeared to be the model father for their twin children (Faith and Don). But what neither Terry or Mary know is that Vin had paid a nurse to switch his real son at birth with another boy. It seems the real son was born with the features of a wild animal. This little substitution may have gone unnoticed, but Vin finds out the former nurse had a carnival background and returned to her former profession once she acquired Vin and Mary's real son. And the latest news is that her star attraction killed her, then fled the sideshow.
And now there is a very strange lodger at the house....
I have to give the novel bonus points for subtlety. It grew on me until I sat reading the final 100 pages straight-through. It's a work of quiet horror, where the real scares are the evil deeds which live on long after their commission.
Posted by Tim Mayer at 11:01 PM